We use cookies & pixels to help us improve, promote, and protect our services. By continuing to use the site, you agree to our privacy policy.
Continue
FREE MASTERCLASS REVEALS:
“The Exact Ladder Hack That My Hollywood Manager Made Me Take So I Get Noticed In The Industry And I Get Projects…”
And How to ETHICALLY Knock It Off In Less Than 10 Minutes!
Today @ {{webinar_time}}
countdown
00Hours00Minutes00Seconds
Simply enter your email address below to access the class:
Register FREE Now
By entering your email, you are subscribing to Cinematic Composing's promotional marketing email list. If you are a member of the European Union, in the first email, you will be given the option to opt-in to my regular marketing emails after the launch sequence is over. If you choose not to, you will not receive any more marketing or promotional emails after this sequence is complete.
REGISTER WITH MESSENGER INSTEAD
CUSTOM JAVASCRIPT / HTML
This free masterclass takes you through the 3 Simple Steps to 10x your Composing Career
A simple-to-follow system that gives you visibility, a way to find new projects, and a plan to market yourself...even if you still don't have any credits!
SECRET ONE:
The FURTHER AWAY you are from LA, the MORE projects you’ll find!
SECRET TWO:
How To Get BIG SCORING GIGS Even If You Have No Experience, No Credits, No Story, No Results, And No Expertise!
SECRET THREE:
How To Get The Exact SAME Customers Who Are Currently Going To Your Competitors… To Start Calling To YOUR Door Instead!
STEP ONE:
How to create an online business plan that won't make you broke before you begin. So many plans assume you have time and money in endless supply!

STEP TWO:
What offers you NEED in every online business that will drive sales. Everything else you need to IGNORE when you start.
STEP THREE: Where and when you should spend money to avoid shiny object syndrome and distraction. I was profitable from day one because of this.
STEP FOUR:
How to pick the best list building and funnel strategy for YOUR niche so you're making money faster! There are lots of good ideas that are the enemy of the BEST idea for you!
STEP FIVE:
Tips & tricks to evaluate what sorts of content and social media strategy you need and DON'T need. This is the #1 problem most business owners struggle with.
SECRET ONE:
The FURTHER AWAY you are from LA, the MORE projects you’ll find!
SECRET TWO:
How To Get BIG SCORING GIGS Even If You Have No Experience, No Credits, No Story, No Results, And No Expertise!
SECRET THREE:
How To Get The Exact SAME Clients Who Are Currently Going To Your Competitors… To Start Calling To YOUR Door Instead!
Skeptical and burned by bad webinars
and marketers? Watch This. 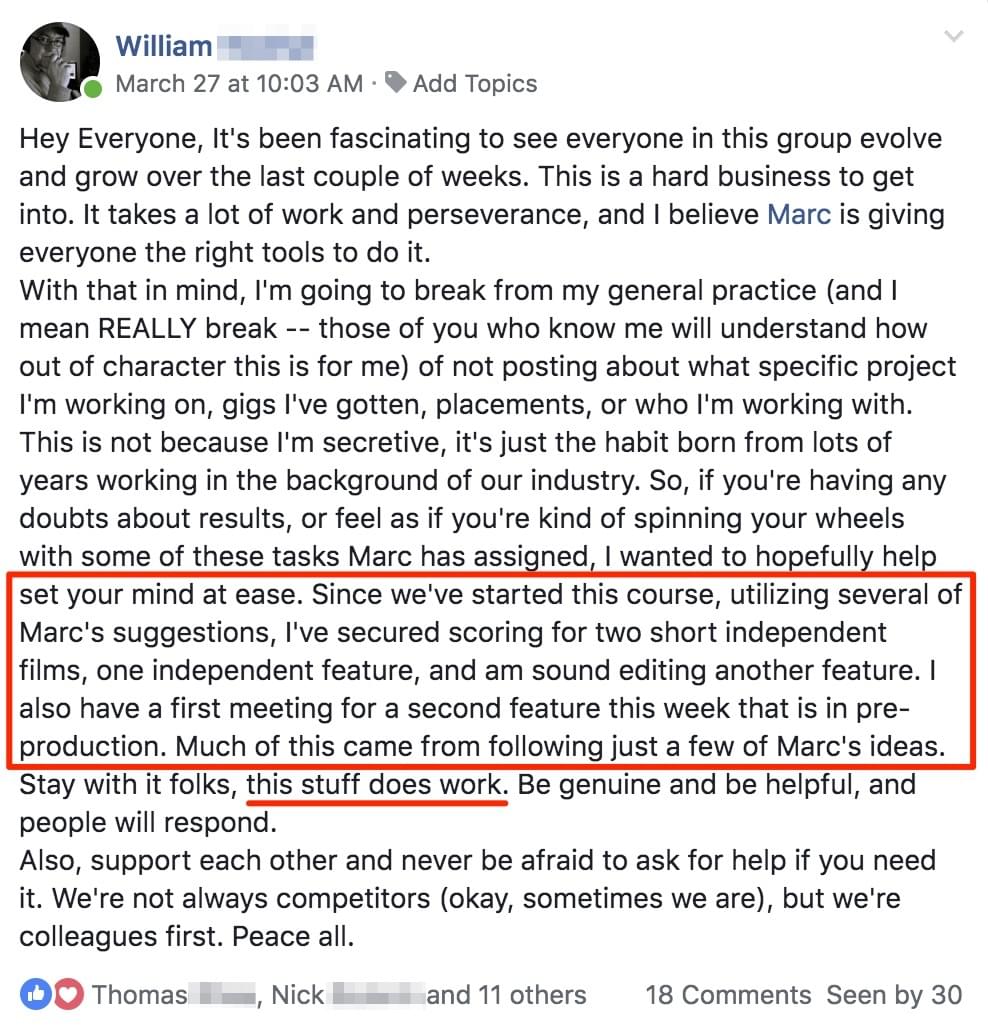 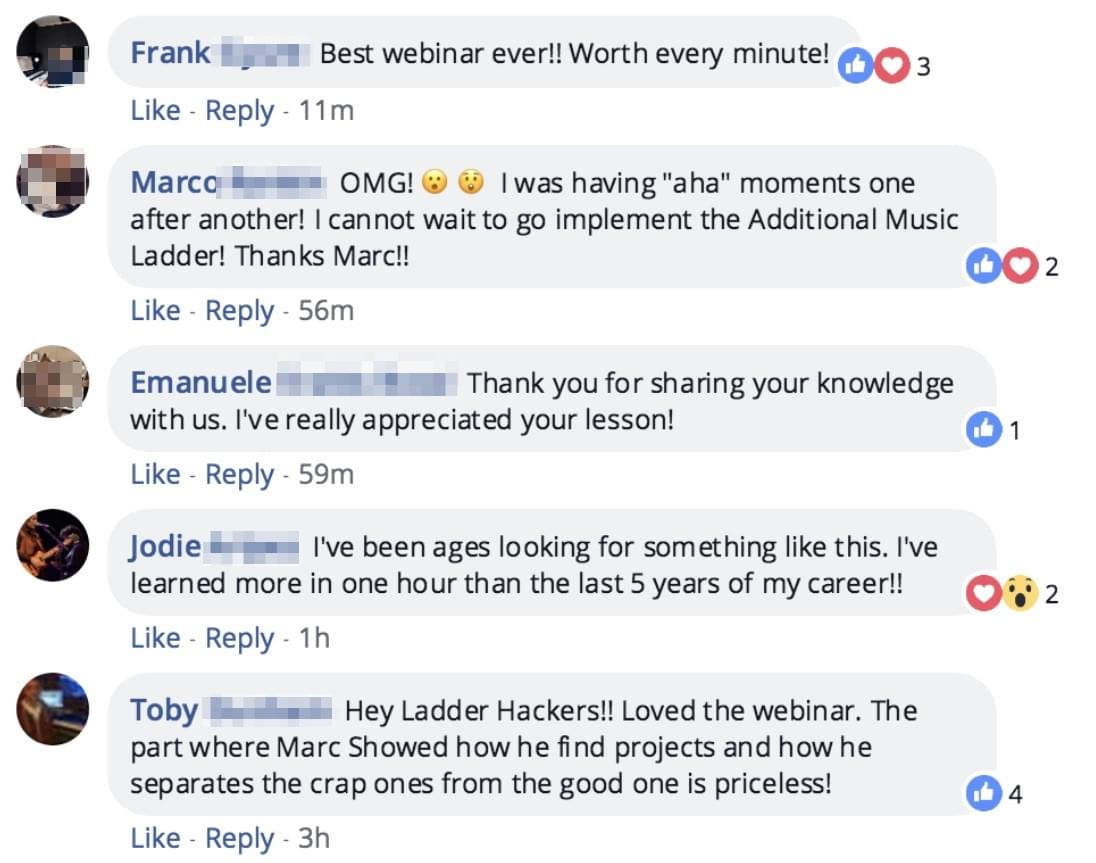 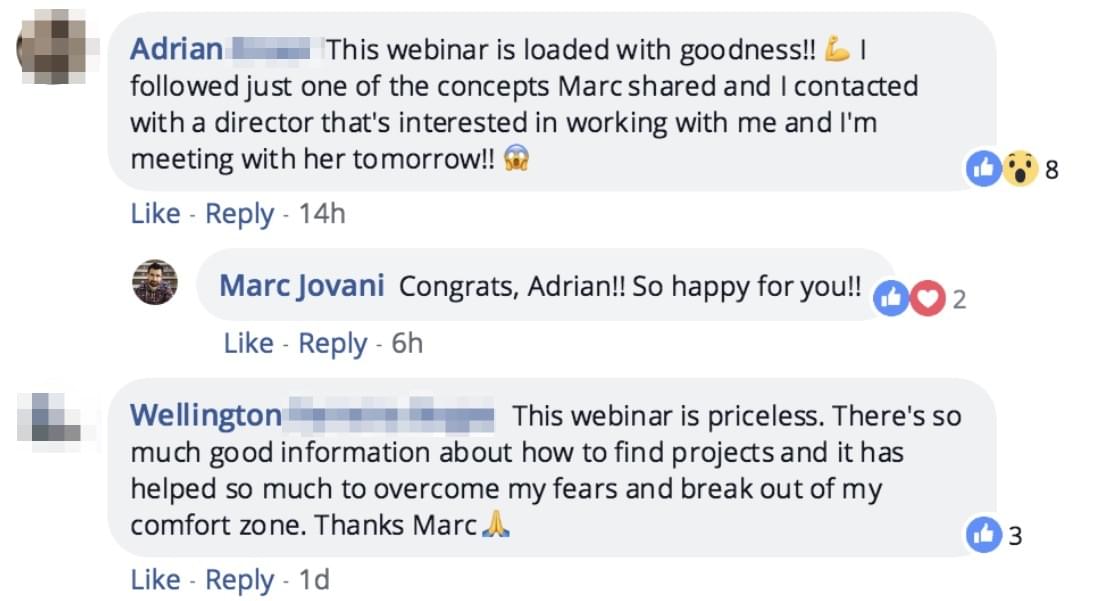 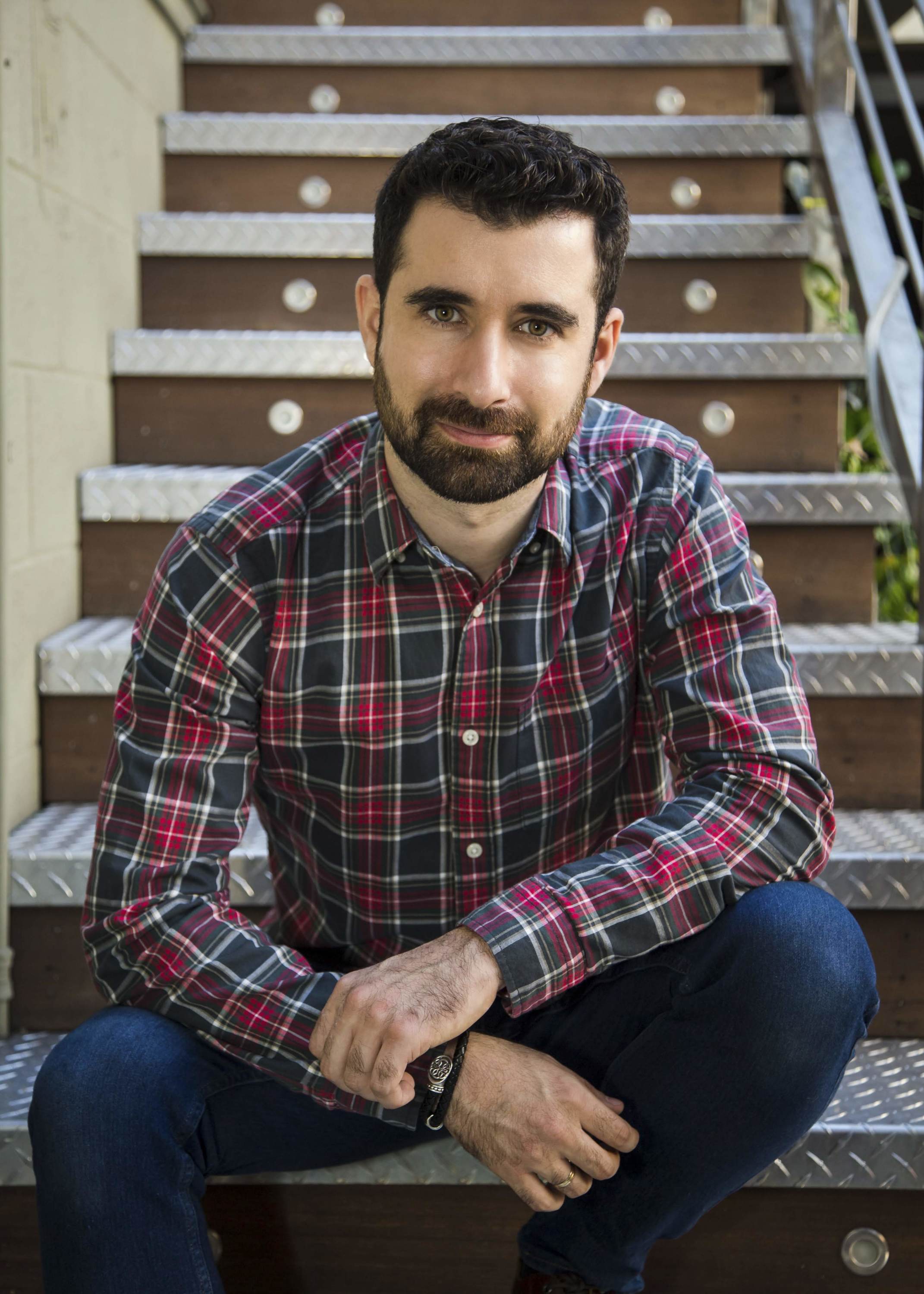 Marc Jovani
Film Composer
Digital Marketing Strategist
About The Speaker:
Julie Stoian is a digital marketing consultant and tech coach, making her mark on the internet through her popular brand Create Your Laptop Life®. Julie has inspired and equipped thousands of up and coming business owners with the skills and strategies they need to create, build, and grow profitable online businesses.
Julie started her journey to entrepreneurship as a blogger and writer, garnering the attention of media outlets like The New York Times and Washington Post with her no-holds-barred approach to social media. After a rocky divorce and unexpected pregnancy in 2014 that left her needing to build a profitable business quickly, Julie transformed her passion and love for internet marketing into the 7-figure business she has today.
She's also a head coach and funnelbuilder working with Russell Brunson and Clickfunnels.
Julie has been featured on media outlets like Anderson LIVE, BBC World Have Your Say, and Rachel Ray, as well as numerous business and marketing podcasts and blogs such as Content Academy, Boss Moms, GoDaddy Garage Blog, and Funnelhacker Radio.
For nearly ten years, Marc Jovani has been working at the highest level of film, providing music for many major studios such as Lionsgate, Syfy, FOX and most recently NETFLIX. He has also composed music for television shows and movies distributed on leading, nationally broadcasted television channels, including Lifetime (USA), TF1 (France), the Hallmark Channel (USA), Canale 5 (Italy), Antena 3 (Spain), HBO (USA) and more. Having received international recognition for numerous prestigious productions, Marc’s desire to work on quality projects is only surpassed by his desire to create the most engaging scores.
By composing stylistically appropriate music across a wide range of genres, Marc’s ability to enhance the experience of the audience is what makes him unique. Supporting the narrative and serving the story are always the primary objectives when it comes to his compositional approach. Jovani’s ability to elevate onscreen drama through his well defined musical voice is what makes his contribution so valuable.
His scores have been recorded with some of the best orchestras and have been conducted by the composer himself in renowned studios such as the historic Eastwood Scoring Stage at Warner Bros studios in Burbank, The Eastwood Scoring Stage in Hollywood, The Bridge Recording in Glendale, and the Village Studios in Los Angeles, among others. In addition to conventional musical composition, Marc specialises in contemporary hybrid scores. In combining modern electronic elements with the now standard orchestral pallet, Marc creates a unique and identifiable sonic identity for every project.
The quality of the above-mentioned productions is illustrated by the national and international accolades they have received, as well as their selection for exhibition at numerous widely attended and high-profile international film festivals.
More about my story....
Register FREE Now 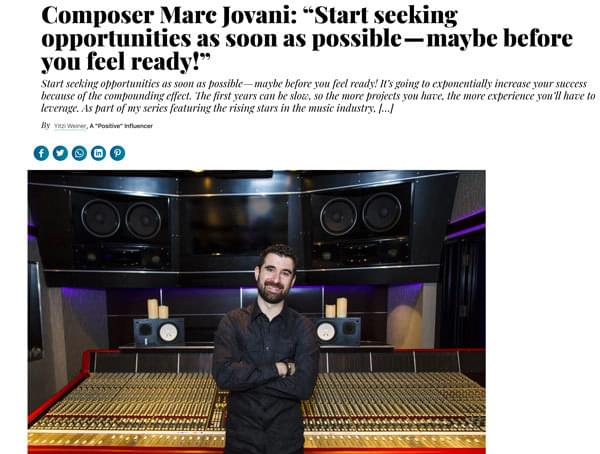 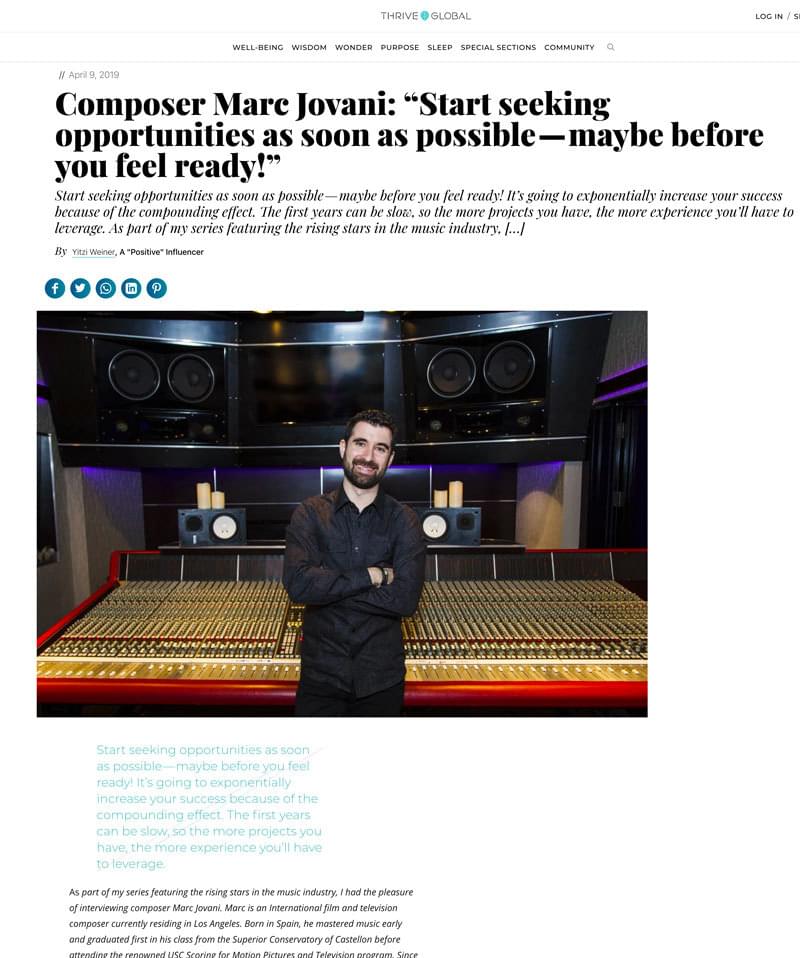 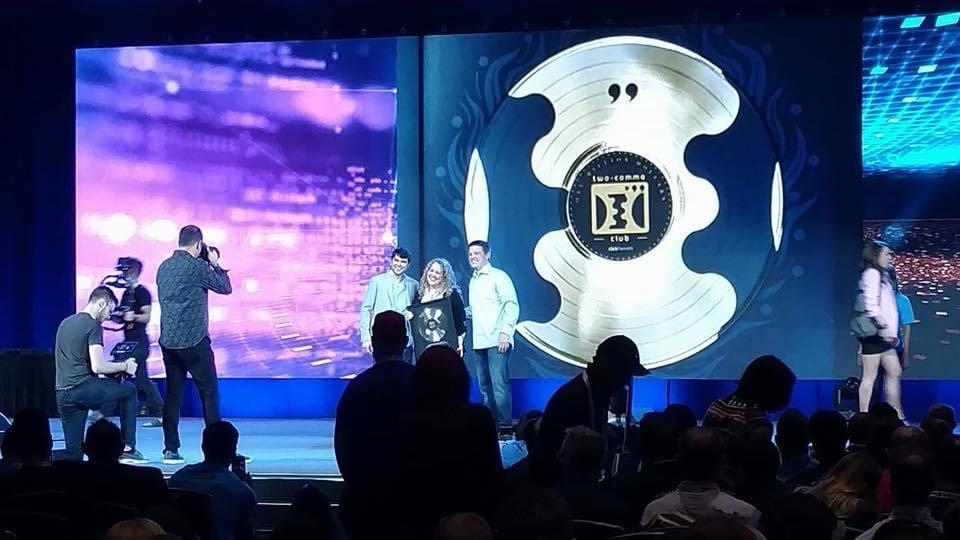 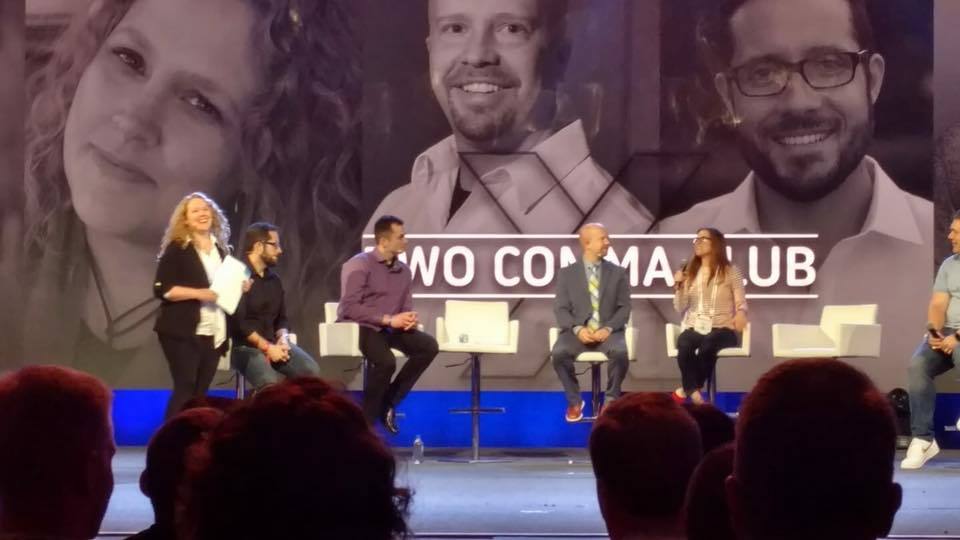 Disclaimer: This presentation is free. There will be a paid program offered at the end. You don't not have to purchase the program in order to get value out of the masterclass. Please note that there is nothing about this that is get projects quickly and easily ("get" rich quick sort of thing). Nope. Everything takes time and energy and skills. People who see results are the people who put in the work!